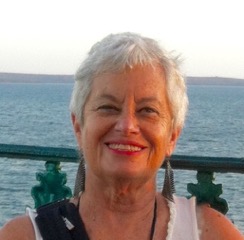 NCJW NY member Myra Thim Tattenbaum remembers the racial housing segregation in Yonkers in the 1970s, when the federal government was withholding funding for affordable housing in the city. There was an opportunity to change how the city’s alderman were elected; realizing that it was up to private citizens to get the city to change their policy prompted Tattenbaum’s first foray into politics.

She became vice president of the League of Women Voters in Yonkers, and led a successful campaign to pass an initiative that would make Alderman elections take place city-wide, instead of by neighborhood, giving constituents more power in fights like the one against segregated housing. Her family moved to Newton, MA, before the housing issue was resolved but Myra’s political career was only getting started.

In Newton, she was encouraged by friends in her PTA and tapped by the local Democratic Party to run for the city’s board of education. She won that race, served for two terms, and then ran and won another position as an alderman in Newton.

When it came to being a woman in politics in the ’70s, Tattenbaum shared an interesting anecdote: “my mother said, ‘doesn’t it bother the men that you’re butting in to how they run the schools?’ It almost didn’t occur to me that I was confronting the powers that be. Most of the parents that got involved were women.”

Myra is excited about all the lobbying that NCJW NY does, having experience with it in Newton when she worked in the state legislature: if you “sit down with politicians and explain your positions, it is a way of swaying — or attempting to sway them. You create a relationship and are inclined to think about your points. Politicians don’t often read legislation; they rely on staff and constituents to make arguments.”

Myra then transferred this experience into her work as an employee for NCJW in New England. She also helped support another NCJW section in greater Boston, made up primarily of younger women. (Sadly, both sections are no longer extant).

Upon moving back to New York, Myra knew she would be involved with NCJW NY; she wanted to finally retire from political organizing, and focus on the JWRC’s social engagements and art program, such as the book club and pastels. But she once again got sucked into politics. In addition to being asked to join her coop and temple boards, Myra is involved with NCJW NY’s Advocacy Leadership Committee, which she says reminds her of her days in politics, and helping women be powerful and in control. Myra didn’t anticipate getting so deeply involved in politics, but “it was wonderful. I don’t hesitate to encourage other women to run for office.”

For 125 years, the National Council of Jewish Women New York has been a powerful force for social change.