Controlling Women: What We Must Do Now to Save Reproductive Freedom 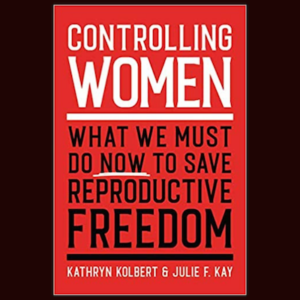 Join Congregation Rodeph Sholom and National Council of Jewish Women New York (NCJW NY) for a virtual discussion with the best legal minds working to advance and protect our reproductive rights, Kathryn Kolbert and Julie F. Kay, about their new book, Controlling Women: What We Must Do Now to Save Reproductive Freedom.

About the Book
Legal titans Kathryn Kolbert and Julie F. Kay share the story of one of the most divisive issues in American politics through behind-the-scenes personal narratives of stunning losses, hard-earned victories, and moving accounts of women and health care providers at the heart of nearly five decades of legal battles. At this make-or-break moment for legal abortion in the United States, Kolbert and Kay propose audacious new strategies inspired by medical advances, state-level protections, human rights models, and activists across the globe whose courage and determination are making a difference.

About the Authors
Kathryn Kolbert has had a long and distinguished career advancing women’s rights. In 1992, she made her second appearance before the U.S. Supreme Court, arguing Planned Parenthood v. Casey, the landmark case that has been widely credited with saving Roe v. Wade. A co-founder of the Center for Reproductive Rights and the Athena Film Festival, she also created NPR’s Justice Talking and the Athena Center for Leadership at Barnard College.

Julie F. Kay began her legal career at the Center for Reproductive Rights and has spent the ensuing decades developing innovative legal and policy initiatives to advance gender equality and religious freedom in the U.S. and internationally. She helped lay the groundwork for the legalization of abortion in Ireland through the first direct challenge to the country’s absolute ban before the European Court of Human Rights and has fought for legal reform to protect the parenting rights of people leaving ultra-religious communities.